Pastéis de Bacalhau are a specialty of Portuguese cuisine can be found in the Mediterranean region.

Pastéis de Bacalhau is also very popular in Angola and Brazil, where he is a snack popular in Portuguese restaurants and wineries.

In central and southern Portugal are known for cod cakes, and in the north, cod balls.

The fish cake was a finalist in the 7 Wonders of Portuguese cuisine.

The first official balls cod recipe from 1904, in a book entitled Cooking Treaty and the Cup, Carlos Bandeira de Melo, an official of the Portuguese army who used the pseudonym Carlos Bento da Maia. Carlos Melo work go down in history as the first to submit a recipe of the dish.

“(…) Take the baked cod, clean the skins and bones, mixed with boiled potatoes and enough salsa cut into pieces, and goes all the bite of the machine. The resulting puree binds with milk and the egg yolks and season with a little fine salt and chili powder. clicks mass, which join the egg whites, beaten previously in the castle, binds everything quickly, takes the mass to spoons which tend, by pretending to be one to the other, (the wet spoon into boiling oil in cakes are frying), and then successively put frying. the oil must be abundant, so that the cakes dive in without touching the bottom. oil is taken with a riddled spoon and left to drain. (…) “

While indicating the method of preparation and ingredients, the author was silent on the proportion of ingredients, however, his description was the basis of the existing revenue variations until today. 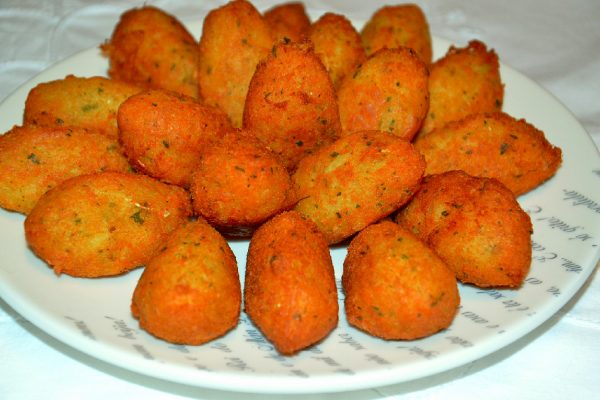